No Result
View All Result
Home Aeroplanes Airbus A320 Family

Flight: London Heathrow to Lisbon (and back)

This is my review of my flight out-bound and in-bound to Lisbon from Heathrow. Since this is a short-haul route, I’ve combined it as a round trip.

TAP have quite a large number of flights to and from Heathrow to Lisbon – I’m currently working on a project in Lisbon, and TAP is offering a better time of flights than British Airways – despite my OneWorld preference.

I needed to take luggage with me to Lisbon, as I had some things to take for my Clients – and seemingly, the Business Class return flights were cheaper paying for two sets of checked in luggage!

As I headed into Heathrow’s Terminal 2, there was a single line for Business Class passengers flying TAP.

I’m mindful that this checkin facility is outsourced, but it appeared to be pretty messy! Lots of chaos and shouting going on at 06:00 – and that was just the staff!*

Once checked in, I was able to use the Fast Track security lane – which only had 1 of the two sets of scanners working. This had a long queue stacking up. Eventually, we were told to move to another lane – behind another huge queue. So much for fast track!*

One good thing about Terminal 2 is that their scanners are so advanced you don’t need to remove your laptops!

*Heathrow are having rather big staffing problems at the moment. But, in my view, that does not excuse providing a sub-standard service!

Checking in and Security at LIS was equally as chaotic with long lines, and a bit of a free for all queueing system in Security!

In Heathrow, I paid a visit to the Lufthansa Lounge. You can find my review of that here.

In Lisbon, I visited the TAP Lounge, as well as the ANA Lounges. You can find my reviews here and here, respectively.

Boarding was
very organized and speedy at both LHR and LIS! I was pleasantly surprised given the issues checking in and at security!

Both my flights were on TAP’s A320neo. I didn’t get any decent pictures of the plane, nor the registration – currently TAP have 11 of these in their fleet of entirely Airbus aircraft.

On my way to LIS, I sat in 1F, and 1A on my return to LHR. The seats are identical, but of course, in mirror format. 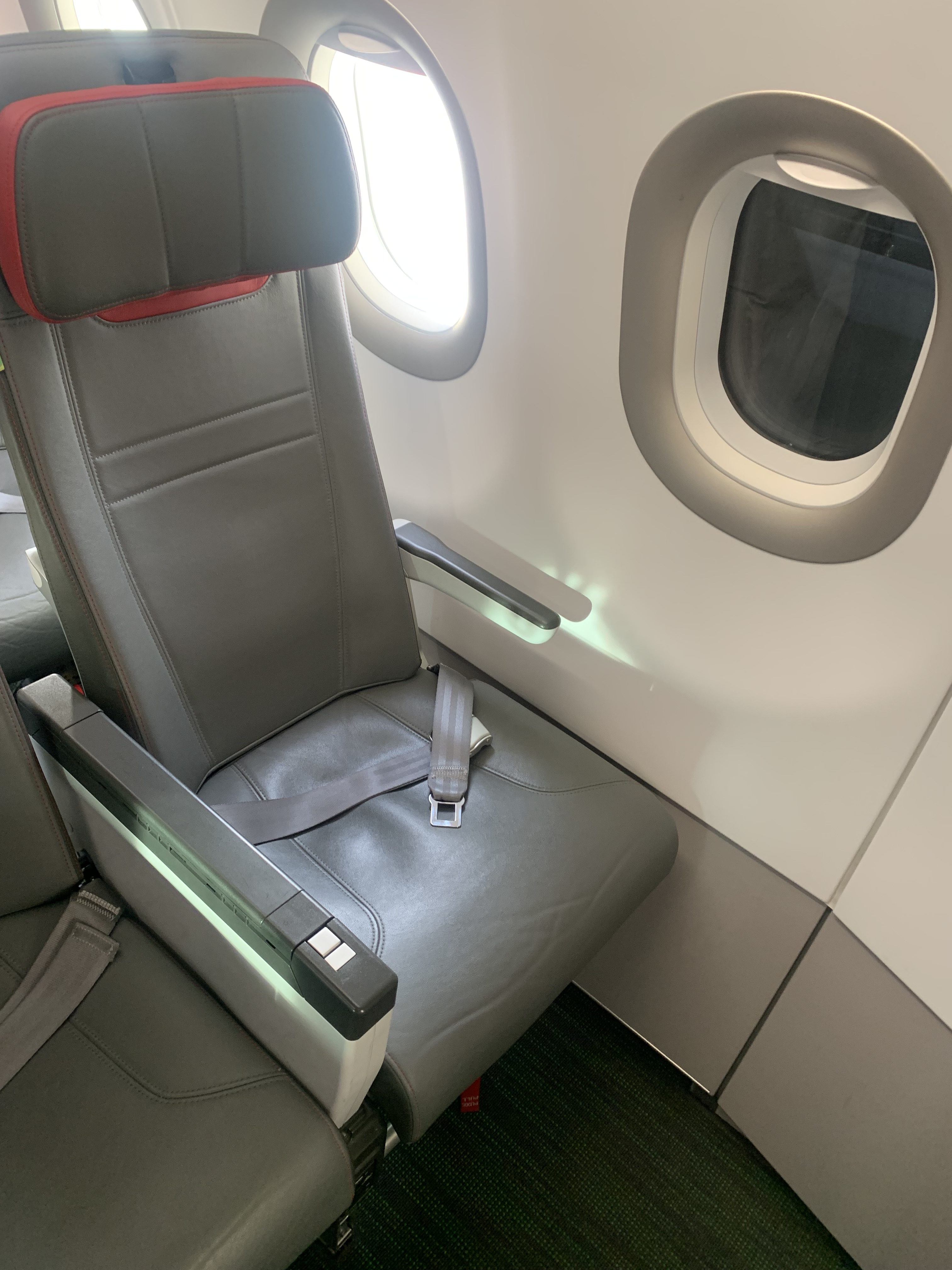 The seats are standard reclining seats, like you would find in short-haul Economy – however the centre seat is not sold. 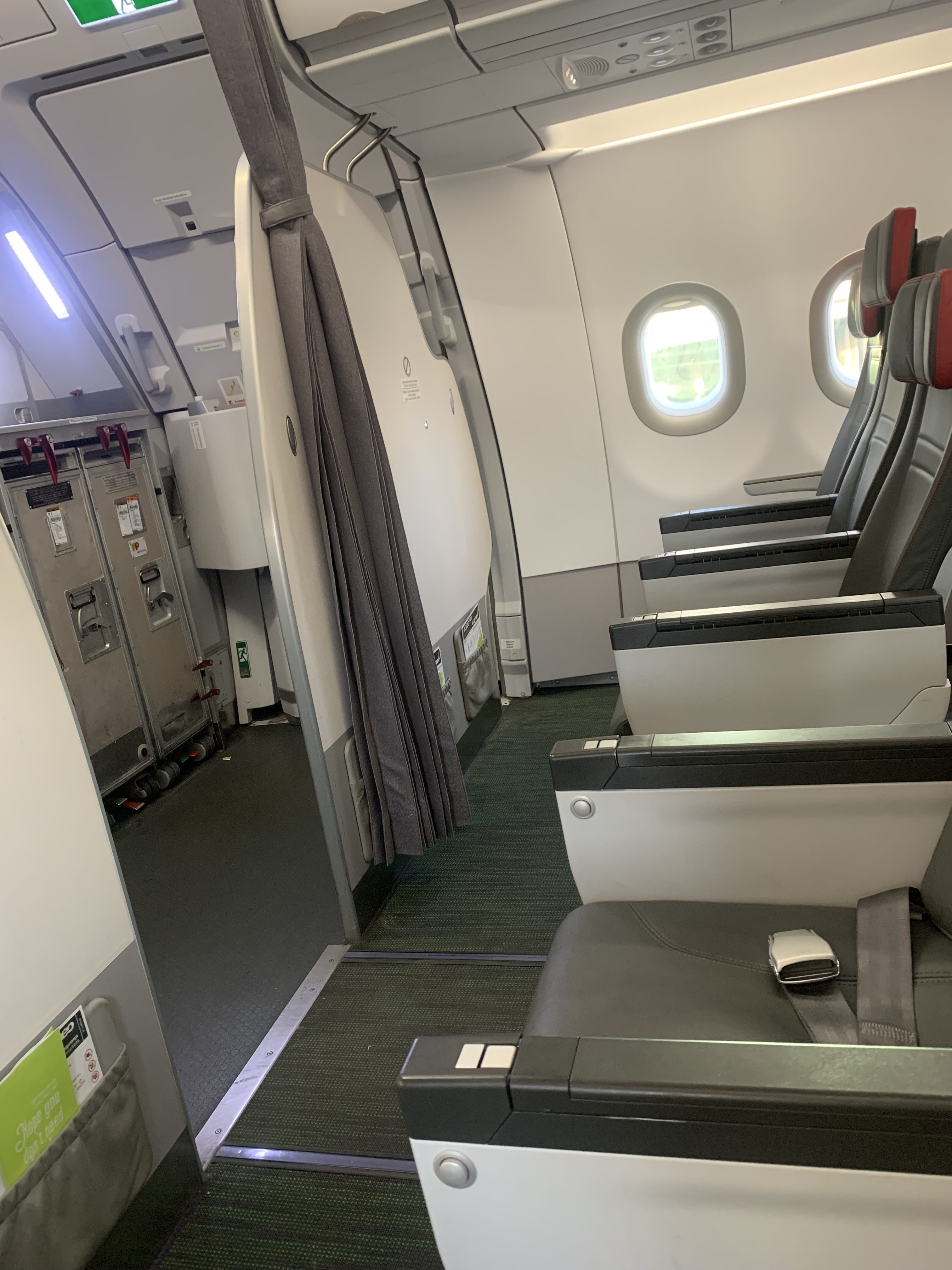 I must say I was extremely impressed at the amount of legroom! There was easily enough space for me to stretch out, and plenty if you’re well over 6ft! 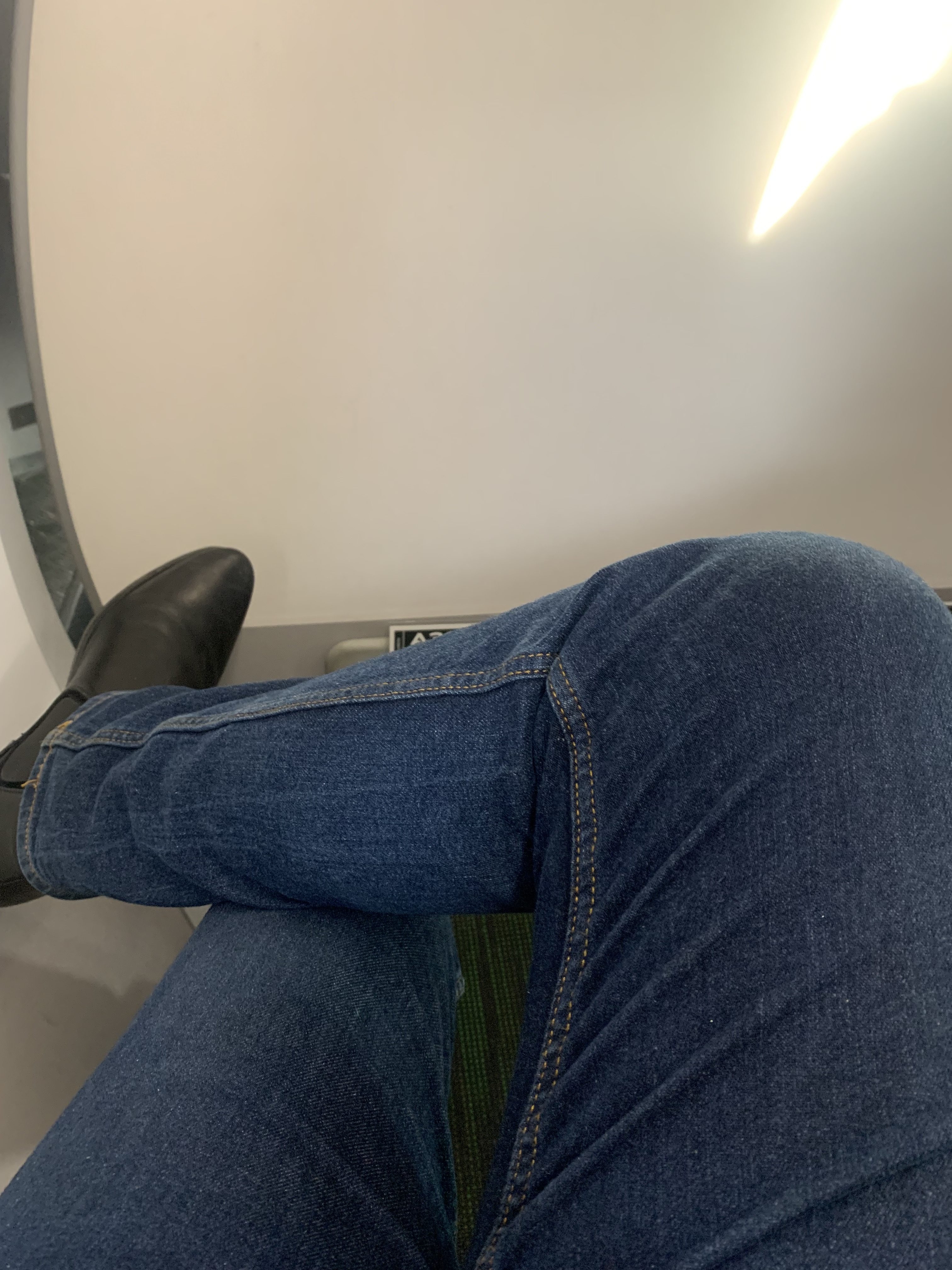 The tray table sits in the arm rests of the seats. As I’ve previously written about on American Airlines – I find these tray tables to be very bendy and not really great for working on.

I don’t really ‘do breakfast’, or at least cooked breakfast – and I was very pleasantly surprised!

TAP don’t really seem to go for the Full English Breakfast – but instead had a single tray service with a variety of things, which included;

A bread basket of pastries and bread was brought round. 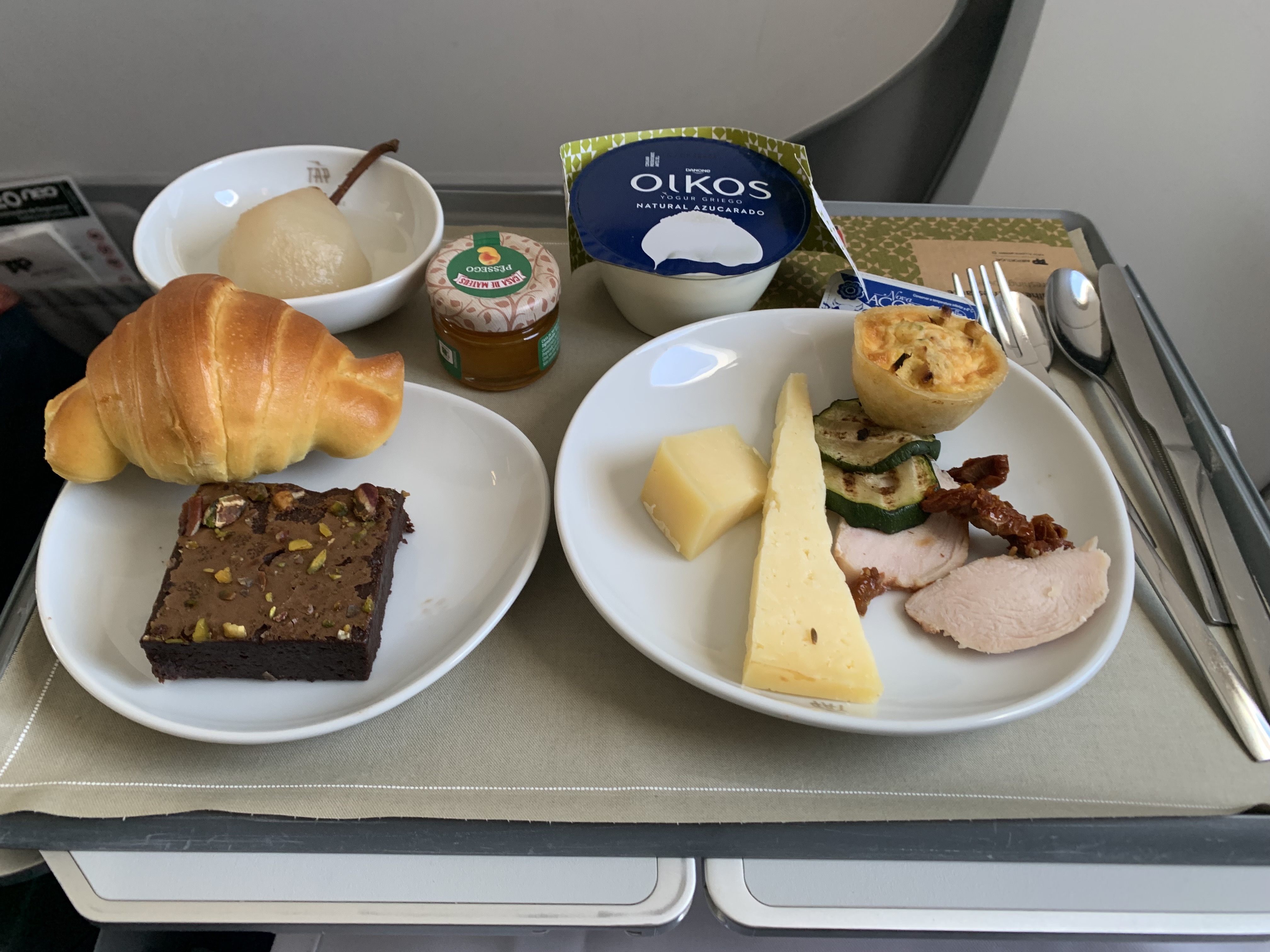 Now, this IS my type of breakfast! It was great and refreshing to have something different!

In a surprising turn to the short-haul flights I’ve flown on with other carriers, I was provided with a Menu from TAP. This was rather a unique experience! 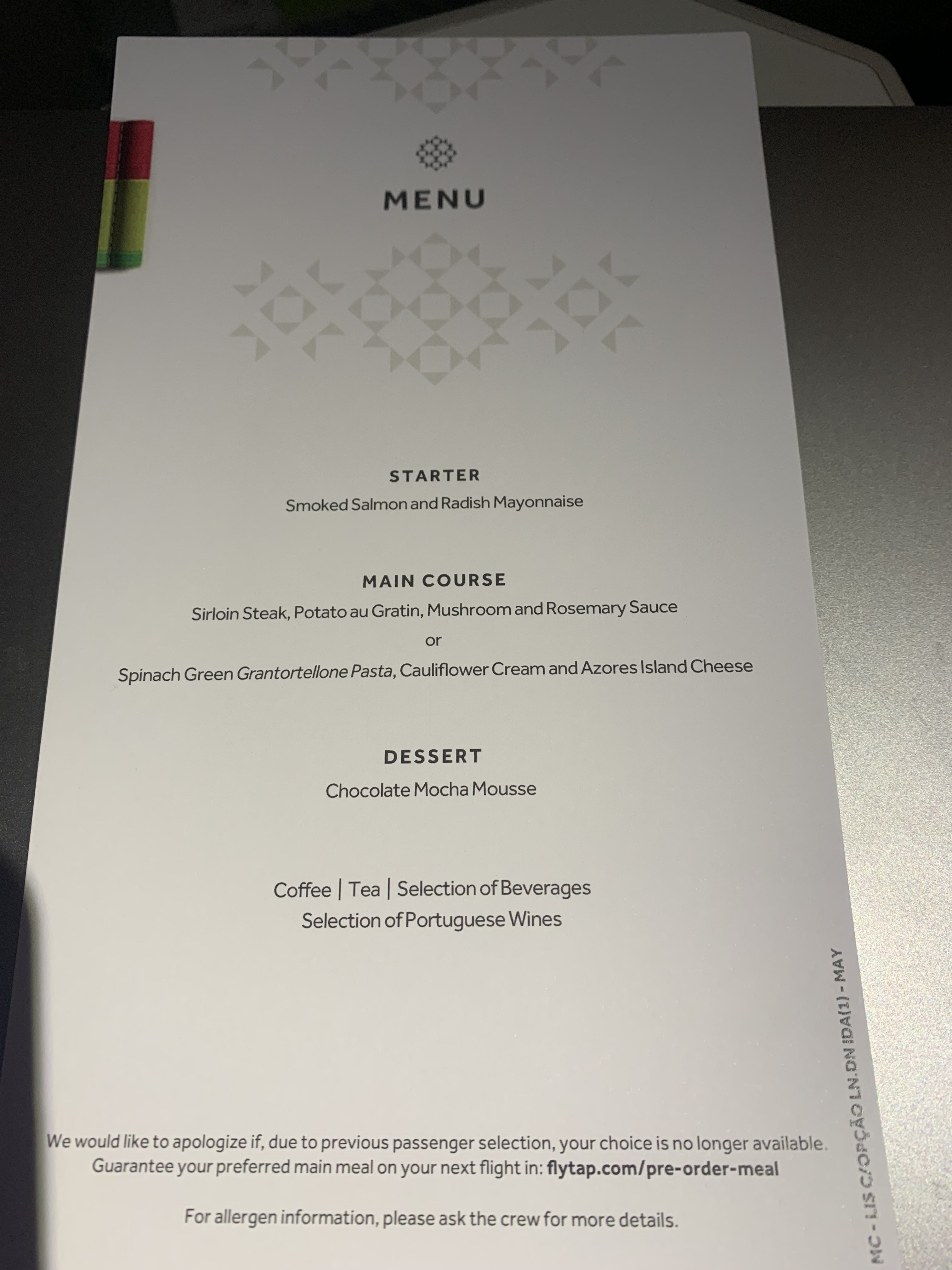 There was a fixed Smoked Salmon starter;

Two options were on offer for the main;

I chose the beef, which was excellent.

Desert was a slightly suspect looking Chocolate Mousse – which looks aside, was actually rather nice! 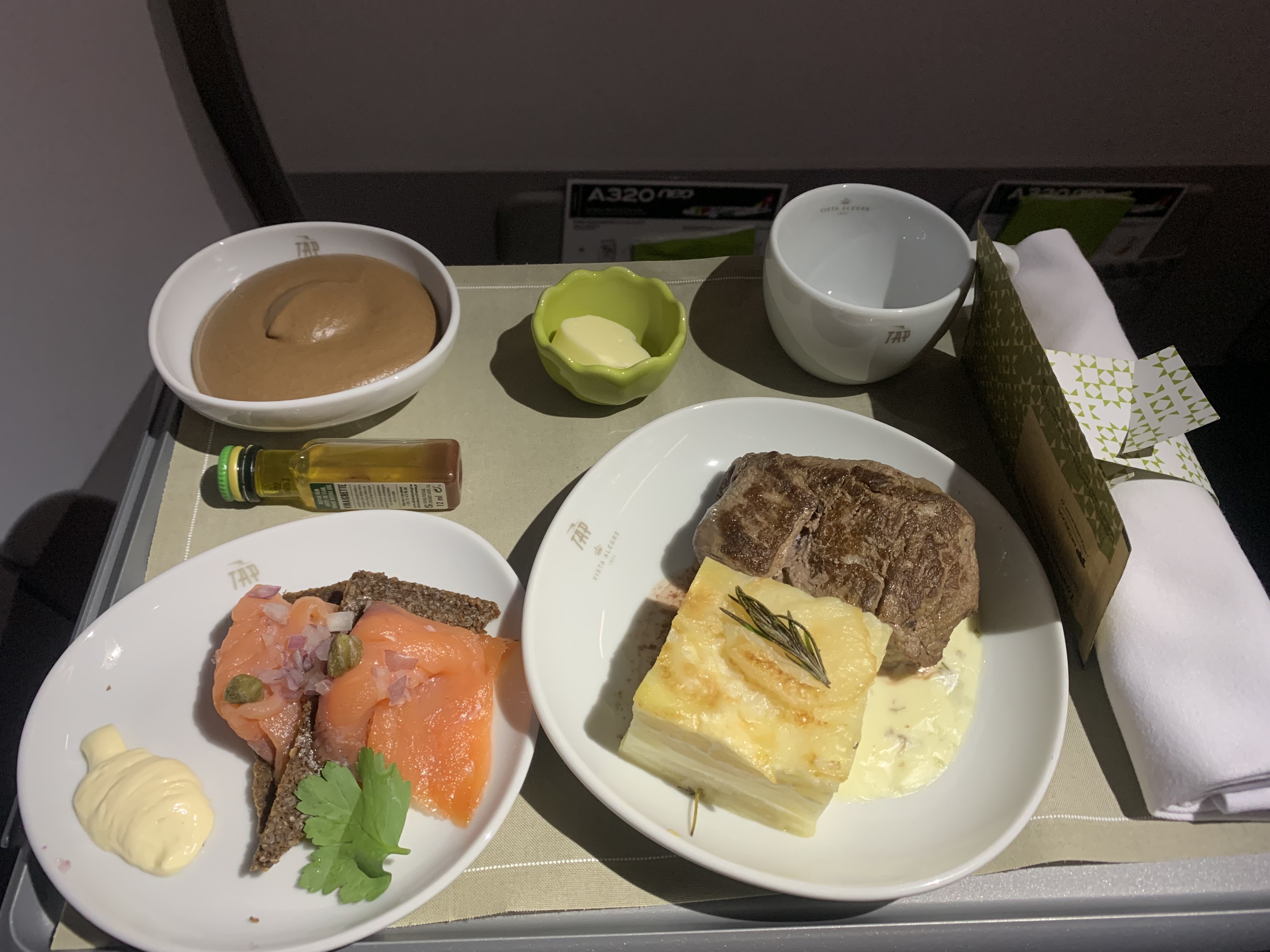 Along came a bread basket to choose from.

On the drinks side, I was brought two bottles of red wine, and invited to try each. Both were
Portuguese – and I didn’t quite clock what they were – but they were very nice!

The only beer available was local Portuguese Sarges, which whilst fine, was slightly limiting!
This was served with mixed nuts. 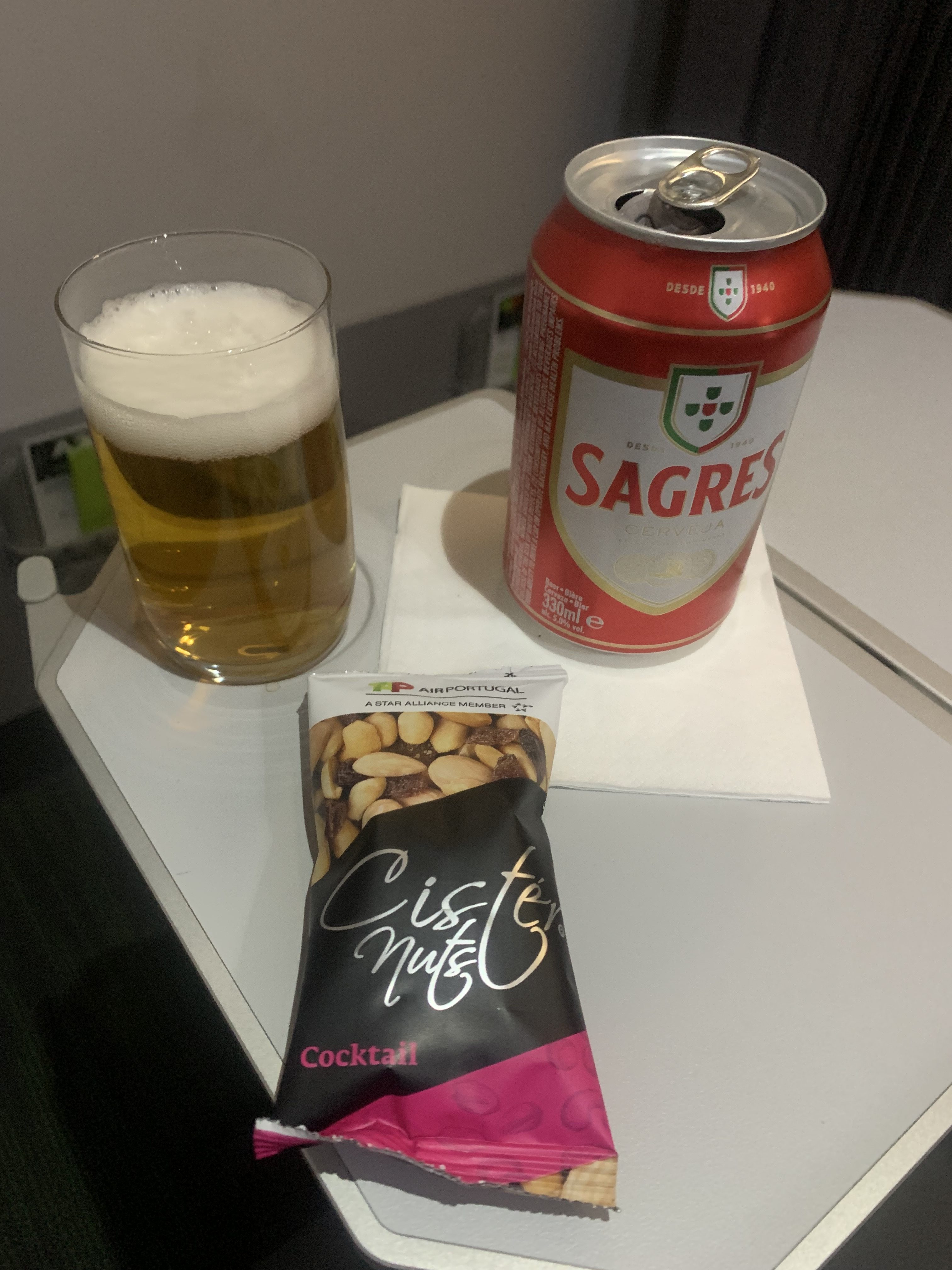 This meal (despite being Short Haul) tops some of British Airways long-haul flights I’ve been on
with single-tray dinner service!

Perhaps unsurprisingly, neither of the flights offered amenities kits. However on the flight back to LHR there were pillows and blankets, which was a nice feature.

In a similar way to amenities kits, no entertainment was available – but hardly unexpected on such a short flight!

Unless I did something wrong, I couldn’t find any Wifi for either of the flights. Perhaps TAP don’t have it available on short-haul flights.

I have to say the Cabin Crew were excellent on both flights!

The dinner service was swiftly and efficiently taken care of, allowing plenty of time for resting or working.

The crew were very polite, couldn’t stop offering me more food/drinks/checking in on me!

Landing in Lisbon was slightly frustrating as were bussed off the plane which took ages – and Passport Control also took forever! However, Passport Control took so long, my luggage was waiting for me!

One thing to note, as is customary with ‘Schengen Airports’, is that once through Passport Control, you’re mixed with both arriving and departing passengers and all the shops/restaurants/etc. Walking from Passport Control to Baggage Reclaim was a long walk, and the airport was busy – on the border of chaos!

Landing at Heathrow was actually very straightforward, despite the reports of late – though landing at 11pm may have had something to do with it! I waited no more than 5 minutes for my bag – and I was done.

This was only two relatively short flights – BUT I was super impressed with TAP’s offering for short-haul flights. It certainly surpasses what BA and American are currently offering.

The flight itself gets full marks, nothing could have been better. However, the queuing at LHR and LIS, and the management of that was just at a Business Class level. Must of this is airport related – but if the airlines can’t bring the airports into tow – who can?!

No Result
View All Result
ADVERTISEMENT

No Result
View All Result